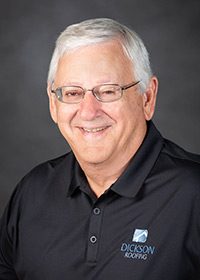 Les has lived and worked in Naples since 1984. He grew up in Oklahoma, where he started roofing as a young boy after school, on weekends and on summer break. After high school, he attended Oklahoma State University where he earned a B.S. in accounting. Les served in the United States Army and Oklahoma National Guard and later went to work at Arthur Young & Company, now known as Ernst & Young. He also served as a Tulsa police officer for five years before establishing Dickson Roofing in 1976.